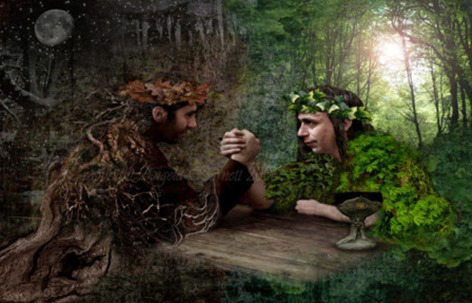 There is a momentous event that happens every year and has forever, though few people seem to know about it.

Every Winter Solstice, the Oak King, the King of the Waxing Year, confronts the Holly King, the King of the Waning Year, and in a backdrop of woods, trees growing bare of leaves, they battle. How they fight, if they use weapons, such things are unknown, because they don’t matter. The point of it is that each time, the Holly King wins, as dependably as the moon rising after the sun’s gone to bed, and thus rules the remainder of the year, or rather, until spring comes and the Oak King reigns again. Being a Celtic Pagan, this story is familiar and comfortable for me, though I don’t consider it a religious tale. It’s a nature story, something anyone could, if they wished to, believe in.

I don’t particularly love cold weather, and autumn, my favorite, is always too short, but it’s better than summer, and I enjoy things like warm blankets, my plushy robe, hot chocolate with marshmallows. And I enjoy Christmas, especially since I’m always done shopping sometimes months before the rest of my family. My parents, especially, are usually still shopping on Christmas Eve, while I begin in January, and aside from stocking stuffers, I’m done, just awaiting a few packages.

The Winter Solstice, or Yule, as we call it, is special for me because my patron god (all Celtic gods, really, but mine maybe especially, as a sun god) is reborn every December 21st, and I feel like that’s when I have him fully back and keeping an eye on me. He symbolically dies on Samhain (Halloween), and I try to give him this interval as a sort of vacation, during which I try to take my problems to the Goddess, though I do still bother him a little.

I don’t think he minds. I feel this god very strongly in my life, and when I turn to my shrine to him, bow my head and pray, when I finish I faintly feel the pressure of a blessing hand on my head. Of course, I could be crazy. But one time in a hospital, a perfect stranger I later made friends with came up to me, knew nothing about me, had no idea who I was, and said, “Do you know the sun god really, really likes you?” That was Ed, who I became friends with but didn’t keep in touch with, to my regret. He was a very powerful witch, I saw demonstrations of his power during our short time together. I always felt a connection to the sun (even though I’m an uber-pale redhead who burns easily), so I was less surprised by this question than you might expect.

Anyway…the holiday season. My favorite thing about it is when my mother plays Christmas music and decorates, which she started today. I feel a little embarrassed when receiving gifts, although I appreciate them, but I LOVE giving gifts. Most powerful, though, is the almost holy feeling in the air, in the night decked out with little lights, the smell of cookies, the red and green and silver and gold trimming the world as though life here itself is a gift. I’m not Christian and I know Jesus was actually probably born in the spring, but I like him. I’m happy to celebrate a kind man’s birthday, whether he was supernatural or not.

Apparently there are people who actually read this, though who, why, et cetera, I don’t know. But I appreciate it, it encourages me to write, and though I don’t know you, I ask my patron god that the powers that be be kind to you in these next cold months, that you feel joyful and at peace in this mad, mad world. The world turns, the cold holly gives way to warm and softer leaves, and the Oak King will sit on the throne again. Be well until then, and beyond.